Why do People do the 'Wrong' Thing?

Because it's right for them right now. Why don’t people do the right thing? Year after year, more forests are burned, more greenhouse gases are emitted, and the planet comes ever closer to that tipping point of dangerous, runaway climate change. Instead of ditching environmentally-dangerous habits and activities and behaving responsibly, people are continuing to do the wrong thing. It’s frustrating for environmental policy makers, and bad news for climate targets.

This dilemma is a recurring problem in conservation initiatives, as well as in development programmes. The problem lies in the disconnect between theory and reality, between the idealised scenarios theorised by development experts, and recipients of their programmes with their messy, unpredictable, non-ideal lives. Conservation and sustainable development programmes tend to follow a template model of planning, which assumes people will behave in neat ways which conform to the logic of the programme. There is little room, even in the ‘risk assessment’ section of these programmes, for accommodating the complex structural, material, and psychological ways that humans make decisions.

In the idealised world of sustainable development, when people do not conform to the logic of the programme, their unreasonable behaviour is seen as anomalous: the programme was right, but people didn't do what they were supposed to do.

In my research in Indonesia, I repeatedly encountered conservation and development programmers who complained that ‘people don’t do as they should’. Programmes designed in Geneva, Washington & New York with expert input from economists and finance specialists didn’t work in the field. The One Map programme, a collaboration between NORAD and the Government of Indonesia, to authorise one, single map of Indonesia’s diverse and extensive forests, was an example. In theory, it sounded like a no-brainer – hands up who thinks everybody should use the same maps, with the same borders and demarcations?

So much for the neat theory. But on the ground, if Daniel uses Wandojo’s map, he has to give use of a chunk of his land to Wandojo. If Wandojo uses Arief’s map, that incline where he plans to grow palm trees gets classified as a slope, and he won’t be allowed to plant there. That doesn’t sound like a good deal to Wandojo or Daniel.

Daniel and Wandojo are not wrong, or stupid. They are simply reacting to their needs and the realities of their lives. Change incurs costs, and the seemingly logical, simple process of using a different map, is an unreasonable headache to the people on the ground.

It’s not just about inconvenience though. Daniel and Wandojo still have bills to pay, crops to get to market, debts to service, and maybe a family celebration to save up for. Not being able to plant those palm trees has a significant trickle-down effect on their lives and communities.

Daniel and Wandojo are being asked to give something up and make themselves worse-off, but the demands on them, the expectations of them, have not changed. They have to perform to the same level, with additional handicaps.

That is because the changes designed in conference rooms in Oslo and Geneva ignore massive structural problems. They focus on processes, symptoms, and outcomes. It’s like pouring filler into the cracks in your walls and floors, ignoring the fact that your house is teetering on a sink hole.

Daniel and Wandojo have no choice. They are trapped in a cycle of limited options. But what about middle class citizens in wealthy countries like Switzerland, France, Australia, or Canada? Those people have more flexibility for change, right?

Actually, they don’t. Sure, they can make some consumption choices. They can choose to drive a hybrid or a Tesla. They can choose organic chicken and Fairtrade coffee and take a tote bag to the shops and their own re-usable cup to the coffee shop. But these are choices within spaces that have already been decided and designed for them.

The guilt individuals feel about the effects of their personal life choices on the planet, is misplaced. You flew to Greece last summer. You drive a car. You bought a flat screen TV made in China. You: bad. But I’m willing to bet you didn’t wake up this morning and think ‘I don’t give a stuff about the planet: I’m going to pump some planet-burning emissions out of my tailpipe’. You have very little choice about the system of goals, priorities, and values within which you make tiny decisions.

The system needs to change, not the decisions of individuals. The choices individuals can make on their own are not enough to change the system. The system is just too big, and choosing a Tesla, recycling your bottles, changing your energy supplier to be a bit more green, is a drop in the warming ocean.

So what does all this mean for environmental policy? Well for a start, there’s no point in policy making people feel guilty for what they do every day. If the system allows us – more than that: compels us – to do the wrong thing every day, then the system is the problem. You and me buying Fairtrade coffee isn’t going to make up for the fact that the whole structure of our lives compels us to make the wrong decisions. A chicken can’t lay a duck egg: it’s a chicken. Similarly, a system designed to maximise profits, extract resources, and ignore the damage it causes, cannot be sustainable.

Environmental policy has the wrong target in its sights. It’s not the pension funds that need to divest from fossil fuels. It’s not the consumer goods companies that need to clean up their supply chains and use RSPO-certified palm oil. It’s not that car companies need to manufacture green cars. All those are just slabs of marble in the great pyramid.

Environmental policy needs to aim higher, and broader. It needs to aim at deconstructing the entire system of motivations, priorities, and aims.

Why does an energy company dig up hydrocarbons? Because they are profitable. Why does a consumer goods company manufacture shampoos, body creams, washing detergents? For profit. Why do car companies manufacture cars? For profit.

The requirement to turn quarterly profits drives companies to do stupid things like manufacture laptops and mobile phones that stop working after 5 years. It forces companies to dig up metals and hydrocarbons during COVID-19, even though there is little demand for the materials. It compels girls and guys in suits to make investments on Wall Street to expand palm oil plantations in Indonesia, even though vast amounts of the palm oil produced are never even used, so the destruction of ancient, eco-sustaining forests is totally pointless.

People in supermarkets, or working on small farms or large conglomerates, do not do the wrong thing. People do what they are compelled to do, by vast structural realities and demands that they can’t control.

Guest post: Bernice Maxton-Lee is the author of 'A Chicken Can’t Lay a Duck Egg: How Covid-19 can solve the climate crisis', and 'Forest Conservation and Sustainability in Indonesia: A Political Economy Study of International Governance Failure'. A former director of the Jane Goodall Institute, she is a teacher, post-colonial protester, and climate agitator. She writes, blogs, tweets, and generally tries to open closed eyes to the eco-sidal practices of global economic ideology. She hopes humanity will look back in years to come and wipe its brow in relief that climate collapse was avoided, but she’s getting nervous. She is a Research Associate with ForDev at ETH Zurich.

A Chicken Can’t Lay a Duck Egg: How Covid-19 can solve the climate crisis (see cover picture below). 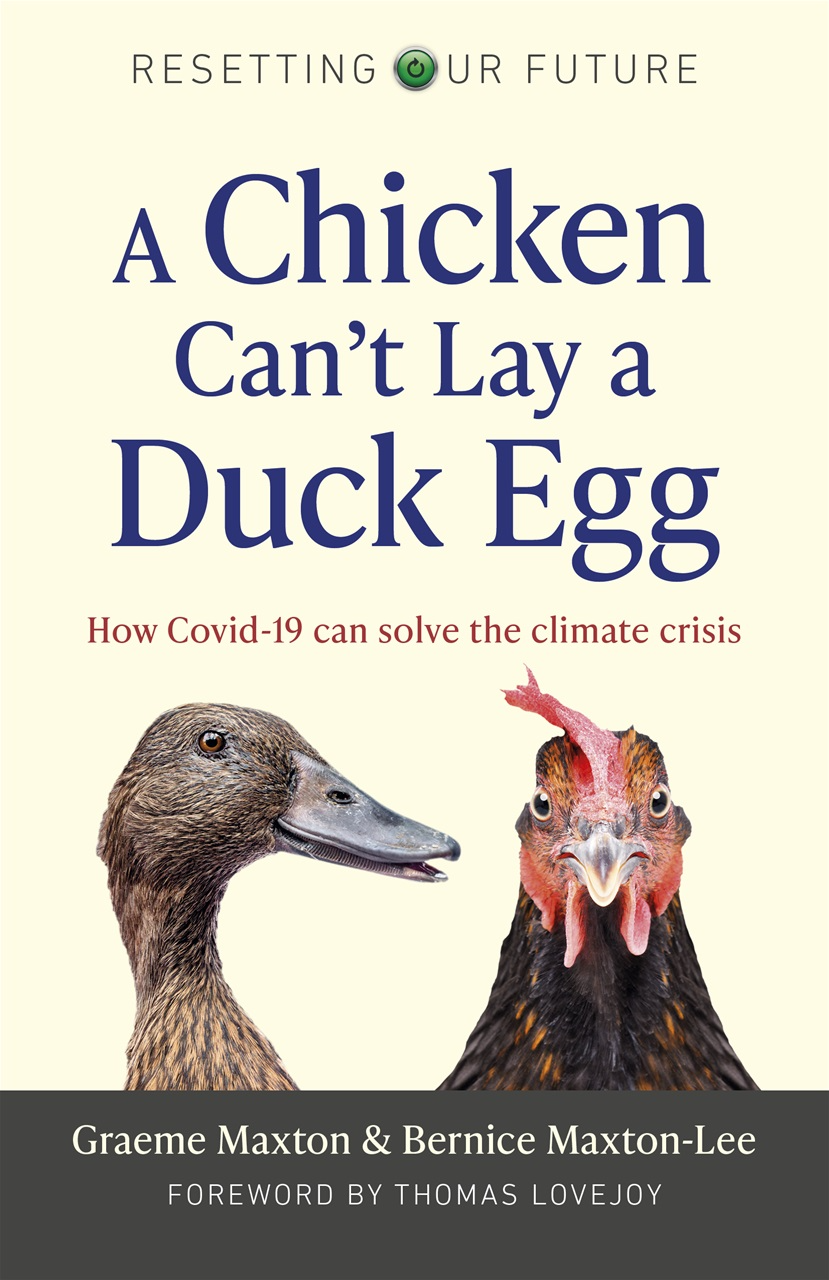