The Earth’s forests are at increasing risk from changes in climate and land-use, both the result of complex, interacting chains of cause and effect. Changes in temperature and rainfall act over decades and centuries to alter the delicate balance in forest ecosystems. Trees are logged for construction and heating. Forests are cleared to provide additional space for farming and infrastructure, with agriculture being the predominant driver of deforestation.
In May 2020, Global Forest Watch reported that the tropics lost 11.9 million hectares of tree cover in 2019. Over the last 20 years, net forest loss has stagnated at over 5 million hectares lost per year. Multiple conservation initiatives across the world aimed to reverse these trends, but despite some successes, global deforestation continues at an alarming rate. Why are forest conservation initiatives failing to meet their targets? In a recent paper published in One Earth, we suggest that failure to understand human behaviour is at the heart of the issue. Landscapes do not arise spontaneously; humans shape them. Landscapes today are primarily influenced not by ecological processes, but by social processes, such as policy and economy, and the decisions people take. Thus, failure to recognise the capacity of people to act independently and make their own decisions leads to conservation initiatives that neglect a key driver of forest losses.
Using modelling techniques that account for the human aspects of conservation and structured games can help decision-makers reach a consensus and align forces independently from their own internal values or perspectives.

Social context matters
Examining past ‘forest transitions’, which describe the shift from a shrinking to an expanding forest, along with the broader social context that influence landscapes, can give us clues about how to improve forest conservation initiatives. Halting deforestation can only slow down and stop the loss, but restoration efforts are needed to regain forest cover. How do transitions happen? The theory says that innovations take place within small groups, where experimentation with novel technologies, practices and policies leads to more environmentally friendly practices. Some of these innovations offer opportunities to alter the rules and routines of the broader regime as they mature and become more cost-effective. An excellent example illustrating this process is the move towards hybrid and electric vehicles; eventually, better practices and technologies replace the older ones. Both systems and people can be resistant to change, especially where new innovations are more expensive than the conventional alternatives. The social context is shaped by the political, social and economic trends, and the values and conventions within society. Although pressure from the public can produce opportunities for shifts in industry practices at this level, conflicting values and opinions within society can undermine efforts for improvements. This suggests that for transitions to happen, there must be pressure from the public, with new values making it possible for innovations to take over.

Understanding how the system works
Changing the values of decision-makers is not imperative for achieving the systemic changes necessary to conserve and restore forests. For successful collaboration, it is only necessary that decision-makers agree on how the world works and how it could change. By asking how instead of why, people are not required to defend their beliefs. If their own knowledge of the system is adequately represented, this can foster a sense of security. Agreement can then be built up when exploring options rather than defending the values and emotions attached to them. It is easier to agree on a description of the world (the world as it is—status quo), than to agree on objectives and values (the world as we want it—desired state). Gaining exposure to the realities experienced by others can also inspire epiphanies, where people dramatically alter their behaviour based on what they have experienced. A ‘theory of change’ can help groups make their hypothesis explicit. Developing such theories while creating policies and projects addressing deforestation, forest degradation and reforestation, would contribute to realistic long-term goal setting. Using these and other similar methods would help decision-makers negotiate common or compatible goals, even when individuals disagree on an overarching objective. Initially, a theory of change is developed based on the ‘mental model’ of the decision-makers—a representation of the perceptions and thought processes of how individuals involved in the process understand the system to work. By revisiting the mental models, they can be refined. A particularly difficult component is to understand how others will behave. Errors in the initial mental models can lead to costly mistakes and failing to adequately predict human behaviour is by far the most common flaw.

Play games to become part of the system
Constructing possible scenarios rather than trying to predict what will happen can provide an opportunity to fast-track the process of testing and validating mental models. However, the complexity surrounding forest conservation and other environmental issues defies the cognitive capacity of most of us and limits the efficacy of these approaches to decision-making. It is far easier to examine the behaviour of a system by playing a strategic game than through open discussions alone. Games help people to cope with the complexity inherent in environmental systems. In a game, the outcomes of an action depend on the interaction between the decisions of the players and the rules of the game. Therefore, they function as a model of a strategic situation and can be used to represent landscapes and their drivers of change.
Games developed through participatory processes represent all the crucial actors, resources, processes, and the ecological, social, economic and political interactions relevant to discussions about environmental initiatives. Players respond to challenges set by the game by thinking strategically and pitching their ideas to other participants, allowing them to explore the success of their strategies and alternative futures in a low-risk environment. They become part of the model, and because they are humans making decisions, they bring the best possible representation of human behaviour into the model. These games have brains inside. The insights decision-makers gain by playing these games can then be translated into a refined theory of change and subsequently, as actual policy propositions.
With the apparent ineffectiveness of previous initiatives to halt deforestation and restore forest cover, the novel approach of games may be exactly what is needed to improve forest conservation outcomes. Now we just need to convince decision-makers to play them. 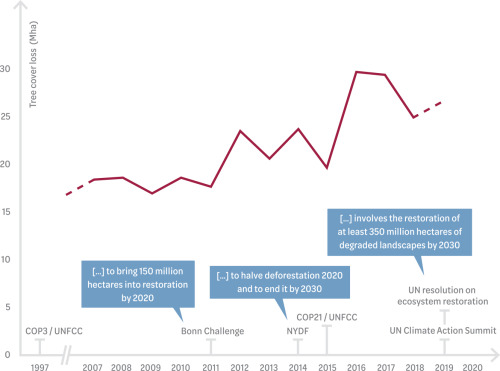 This blog contribution is a summary of the paper ‘The global forest transition as a human affair’, from One Earth and has been produced as an audio file by SciPod. The figure is also from the same paper published under a Creative Commons License.